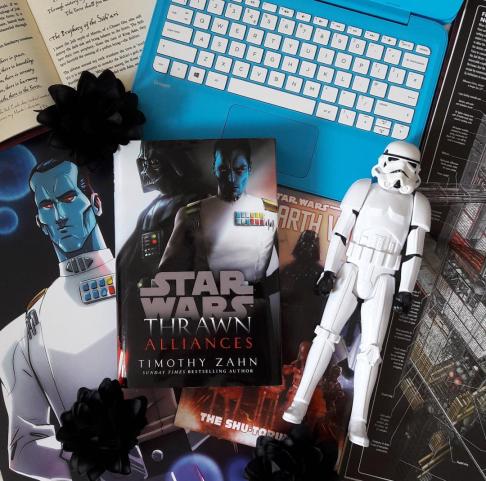 First up, this book marks a massive milestone for my tiny little blog. You see, it was my first ever Advanced Reader Copy of a book! That means that Star Wars Books UK sent me the book (FOR FREE!!! omgomgomg) so that I could review it! When I first started this blog, I had planned for it to be somewhere for me to document my journey through the Star Wars Expanded Universe. With so many Star Wars books, I didn’t want to forget how I felt about any of them, so I decided to blog my journey – my very own Jedi Temple Archives if you will. Fast forward nearly two years and this blog has, well, expanded. I’ve got a fully fledged Star Wars bookstagram account over on Instagram, a lovely little community of fellow fans and bookworms, and now the publisher for Star Wars books in the UK decided to send me a free book! To say I am overwhelmed and blessed is something of an understatement!

Ok! Mush over! On with the review!

Thrawn Alliances by Timothy Zahn is set in two different time periods, the first is during the events of Rebels, so just prior to A New Hope and the second era takes us back to the Clone Wars, looking at a younger Thrawn and General Anakin Skywalker. Zahn masterfully weaves the two timelines together, switching seamlessly between eras.

In both time periods, Thrawn and Anakin are thrown together and forced to work alongside each other as they face a threat on a far flung planet in the Outer Rim. They both must find a way to work together and, ultimately, learn how to trust one another – something which seems to come much easier to Thrawn than to Anakin/Vader!

Before I get to our enigmatic Grand Admiral or the notorious Darth Vader, I can’t talk about this book and not mention Padmé! Padmé crops up in the Clone Wars era of this book and she is on a private mission to help her former handmaiden, Duja. I think Padmé was an inspired choice to use in this book. She is a great action heroine, smart and impulsive and never afraid to roll up her sleeves and get stuck in to the action. It’s always great to see her relationship with Anakin fleshed out. They make a formidable team and they really did light up on the page together.

This book turned into a surprisingly poignant portrayal of young Anakin Skywalker. Zahn also bravely gives us events from Vader’s perspective. I say brave because it has to be difficult to get inside the head of one of the most notorious villains of all time! I found Vader’s point of view to be some of the best chapters of this book. Not only because it is fun to see Vader work through his trust issues with Thrawn and try to decipher his motive, but also for the rare and bittersweet memories that creep through his conscious about his past life, before he became known as Darth Vader.

In his head, Vader refers to himself as “The Jedi”, meaning Anakin Skywalker. It’s true what he said to Luke on the second Death Star, the name “Anakin Skywalker” really did have no meaning for him for such a long time, given that he refused to acknowledge it himself. Vader seeks to completely dehumanize the very part of him that was human – Anakin. You can really feel the contempt he has for his past, especially given his view of the Jedi. By the end of Revenge of the Sith, Darth Vader believed the Jedi were evil, he said it himself of Mustafar. By referring to his past self as “The Jedi”, he completely divorces himself from that entire part of his life – trying to convince himself that he is now on the right path when we all know this isn’t his destiny!

Vader’s force powers are written so well by Zahn, and we are even treated to some new force abilities which we have not come across before! It’s great to see Vader flex his force muscles and use a more subtle, yet awesomely powerful side to this mystical energy. I also loved seeing “clever” Vader in this book. All to often Vader is associated with his brute strength and blistering rage – it’s easy to forget that he is a highly intelligent and intuitive man and watching him try (and sometimes succeed) to get under Thrawn’s skin was a real treat!

Turning to Thrawn, my beloved Grand Admiral, I have to say I think this was one of my favourite portrayals of him to date! This is Thrawn as we have never seen him before – Thrawn immediately following a significant failure. His failure to capture the Rebels on Atollon has earned him Vader’s contempt and disdain. Not only that but Thrawn himself has been humbled by this defeat. Seeing a character usually so self-assured have to pick himself up from this failure was fascinating – and as a fan of Thrawn I found him extremely compelling here. There was a hesitancy to him, as if the defeat had sown the seeds of doubt in himself and his abilities. Vader was the perfect counterpart to this and his derision of Thrawn actually ended up bolstering Thrawn as he rallied against Vader’s jibes. Rather than be cowed by his defeat, Thrawn chose to learn from his past error and stand his ground against the mighty Sith Lord.

I’ve said this before but it definitely bears repeating here – Vader and Thrawn are the perfect foils for each other as they are the other’s total equal and opposite. Thrawn, with his cool logic and cold calculation is up against Darth Vader, all fire and unbridled fury. Although they are polar opposites this actually serves to make them a formidable team, if only they would choose to let go of their prejudices and work together! They are almost equals, even though Vader sometimes seeks to exert his dominance over Thrawn. Thrawn himself never seems intimidated by Vader, but he is aware of the other’s ability to snuff out his existence in nothing more than a fit of pique. This was such an interesting problem to watch Thrawn navigate – for once he is pitted against / working with an equal, if not superior. It was fascinating to see Thrawn be forced to reveal some of his cards which he usually keeps so close to his chest as Vader’s patience with his machinations runs out.

Themes of loyalty and trust are constantly visited in this book. Vader questions Thrawn’s loyalty to the Empire. Thrawn implores Vader and, indeed, young Anakin Skywalker to trust him. Padmé asks Anakin to trust her. It’s interesting to see what this trust means between characters who despise each other and indeed, those who love each other.

The back of the book says it’s ‘time for Thrawn to face his future’ and it was fascinating to start to see where Thrawn’s loyalties truly lie – whether that’s with the Empire he has sworn to serve or the Chiss Ascendancy where he was born and raised. Perhaps Thrawn is allied to no-one but himself? He says himself he walks the warrior’s path – “I am a warrior. A warrior may retreat. He does not flee. He may lie in ambush. He does not hide. He may experience victory or defeat. He does not cease to serve,” but whether he serves the Chiss or the Empire remains to be seen. I have my suspicions…

You expect me to criticise Zahn writing Thrawn?! Come on!! Oh, ok fine – I can come up with two critiques in the interests of balance. First, if you have not watched Rebels (like me) or not spoiled yourself for Rebels (unlike me) then there are some references in this book that will go over your head. Whilst it is admirable that the Star Wars books are all forming a cohesive canon with the films and TV series, it is less than ideal if you haven’t got the time or resources to consume all the material when it keeps cropping up! I would say that I wasn’t confused by any of the Rebels references and it certainly doesn’t detract from the story, it’s just there were some throw away comments made by characters that were lost on me!

Another thing which, although probably obvious, is worth bearing in mind. If you are a fan of the “good guys” so to speak, then this book might not be for you! The Anakin and Padmé chapters are probably not enough for die-hard rebels. This book all about Thrawn and Vader, and if villains are not your jam then I don’t think you will enjoy this book. If however you enjoy your villains not only badass, but complex, occasionally introspective and forced into situations outside of their comfort zones then this book is most certainly for you. Also, fans of Thrawn in any form, Darth Vader or indeed Anakin from The Clone Wars TV show will be very, very happy with this book!

Overall: Zahn knocks it out of the park with this impressive, intriguing and exciting tale of two of Star Wars’ most notorious villains.