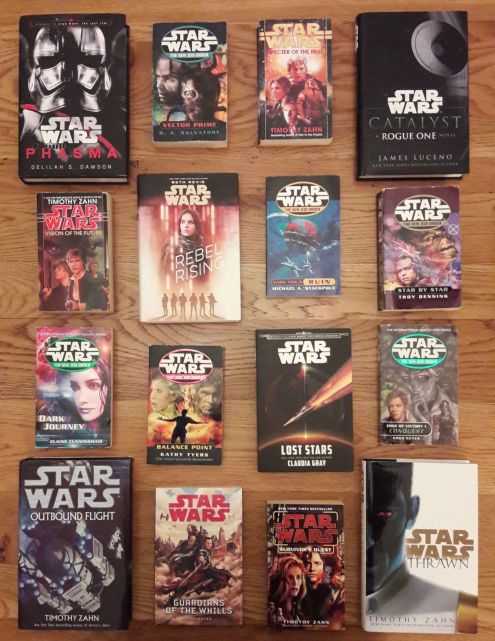 As this year draws to a close, I thought it would be nice to take a look back at the Star Wars books I have read this year! I’ve been pleased with the amount I have gotten through this year (especially since…shock horror…I haven’t just been reading Star Wars books, I’ve mixed it up and taken breaks along the way, especially after the emotional trauma caused by Star by Star!) and I think I’ve made real progress with working my way through the Legends timeline. Plus I’ve broken my own rule when I started this blog of reading just Legends books, as I’ve read a handful of the new canon books. I’m so glad I decided to break this rule as some of the canon books I have read have given me such a deeper insight into the new films, plus it’s so interesting to compare them to the Legends novels! It’s clear the new books are going in a different direction to Legends, and it’s going to be super interesting to see how they shape up with each film release.

This year I’ve read 20 Star Wars novels, predominantly Legends but with a smattering of new canon here and there. Anyone who follows me on Twitter or who listens to my podcast, Bright Tree Radio, knows just how much I loved Catalyst. It was my first ever new canon novel and, gee whizz, what a novel to start with! It’s one of my favourite new canon novels and actually one of my favourite Star Wars novels of all time. I loved the dynamic between Galen, Lyra and Krennic. I loved seeing Krennic through Lyra’s eyes as she tries to navigate his machinations and treachery. Krennic himself is a fascinating character and it was so much fun to watch him try to climb the ranks of the Galactic Republic using mostly his wits and deceptions. This novel adds so much to Rogue One and I’ve never watched the opening scene without tearing up since!

Another highlight for me was starting New Jedi Order, with the Edge of Victory duology and Star by Star being my favourites so far, for one reason – Anakin Solo. I’ve not fallen so hard for a character in a long time! His adventures with Tahiri on Yavin 4 were thrilling and exciting to read. Especially with the pair’s growing connection with the Vong, we got a small glimpse of what makes these terrifying aliens tick which was fascinating. Oh, and Anakin kicked butt in the books too which is always good in my book!

Star by Star was of course a tough read – even more so when I had no idea the Bad Thing was coming and therefore was completely blindsided by it! Grief aside, it’s still a wonderful novel. A desperate, suicidal mission into the heart of Vong territory and the fact that Luke even agreed to it gives you an idea of just how high the stakes were in the war at this stage. It ramped up the tension and indeed, like Jyn in Rogue One, suddenly the war became real for me. I have absolutely no idea how the rest of the New Jedi Order series is going to pan out, but I know for sure I am loving the ride so far! 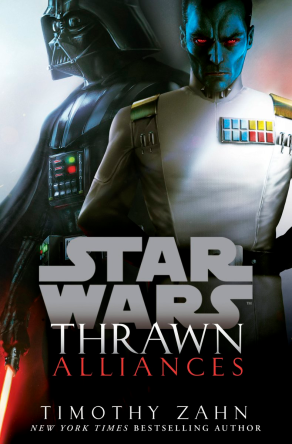 I think 2018 is going to be an exciting year for Star Wars books. With the release of The Last Jedi, they will be able to show us things previously kept under wraps. Plus with Solo hitting the theatres in the summer, I am hyped to see what books they release surrounding that. Especially since some of my favourite books of the new canon so far have been spin offs of Rogue One! 2018 will also be the year we get to read Thrawn: Alliances – the second canon book by Timothy Zahn which I am beyond excited for! I can’t believe we are lucky enough to have Zahn continue to write Star Wars stories (about Thrawn no less!) in the new canon!

Turning to my 2018 Legends musings, my goal is to have the New Jedi Order series wrapped up. I have no idea what state the New Republic, or Luke’s Jedi will be in at the end of it! I think they will beat the Vong (obv) but it’s already come at such a great cost!

For me, even though I have read some really great Star Wars books this year, some of which have smashed their way to the very top of my favourite novels, 2017 will always be the year that I lost Anakin Solo. I can’t think of a single other fictional character’s death which hit me harder. I miss him so much and I know for sure that my first Legends book re-read will be Edge of Victory – my favourite Anakin book. I really hope that Jaina can take his place in my heart. Dark Journey already went a long way in healing some of the pain! It’s a testament to the value of these novels.

A lot of people ask me why I read Star Wars books – they ask me what I can possibly get from novels which are essentially spin offs from the movie franchise. Some people, who are slightly more au fait with the Star Wars Expanded Universe, have asked why bother reading Legends at all? Why spend the time reading such a massive, sprawling series of books which no longer ‘count’.

I’ve spent a lot of time mulling over these questions, and I think I’ve come up with my answer. The strength in Star Wars, for me, has always been it’s characters. Star Wars contains some of the most beloved and iconic characters of any franchise. Legends in no exception. Legends created characters that people still care about to this day. There is a reason people lost their minds when it was announced that Grand Admiral Thrawn would be appearing in Star Wars Rebels. There is a reason that people were so upset when the novels were rebranded ‘Legends’ and effectively discontinued. It’s because we really care about them. It’s because they contain such powerful stories, stories of love and loss, of adventure, adversity and courage. Not only that, but we get to peek at evil on entirely different level too. I’m not sure if you can even call the Yuzhaan Vong evil actually! They are simply and utterly alien species who have little to no comprehension of human compassion.

Out of these stories, incredible characters have been born. Characters like Thrawn himself, Mara Jade, Talon Karrde, Jacen and Jaina Solo, Kyp Durron and, of course, Anakin Solo. We get to spend so much time with these characters, more time than I have ever spent with a collection of characters. We’ve watched them grow, seen them fail, suffer, fall in love, triumph and excel. 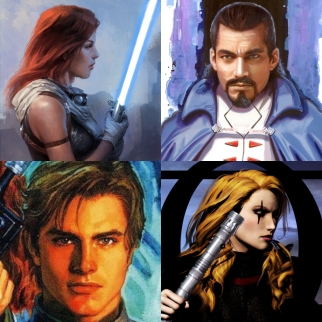 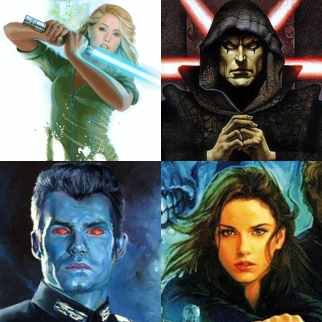 That to me, is why I love Legends, and why I will continue to read as many of them as I possibly can. I’m also looking forward to seeing a new look at the Star Wars Expanded Universe. In 2018, I am looking forward to reading the new Thrawn novel of course. I’m also planning to read the Aftermath trilogy – I know they are probably more polarising than the New Jedi Order novels so I’m really looking forward to forming my own opinion on them! Plus, now I’ve finished watching the Clone Wars, I’m going to read Dark Disciple. Asajj Ventress was a stand-out character for me and I’m hyped to see what she gets up to!

Wow ok that was a long post – whoops! I guess I had a lot of thoughts at the end of the year! So, last but very much not least, a huuuuge thank you to everyone who has supported this blog over the past year. 2017 has seen it grow and, hopefully improve! I am always so grateful and amazed that people take the time to read my musings on this wonderful journey through the Star Wars Expanded Universe, and it is an incredible feeling to connect with people all over the world about this amazing franchise! (Ok now don’t get all mushy on me, Princess!) Let me know what your stand out books were in 2017 – and what are you hyped to read in 2018?! One thing is for sure, it’s a great time to be a Star Wars fan!

I hope you all have a very happy New Year and May the Force be with you (or may Yun Yuzhaan smile on you if you are that way inclined!). 🙂 🙂 🙂