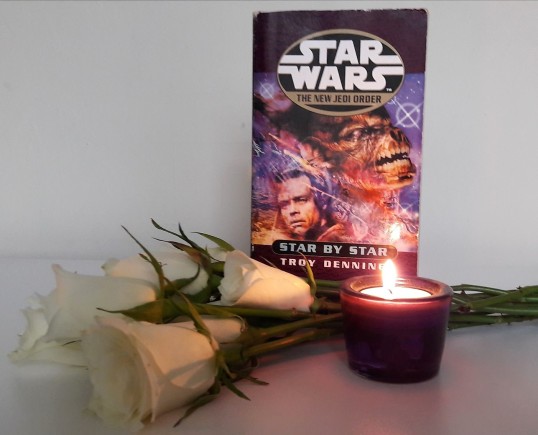 I need to put a major spoiler warning here because a Bad Thing happens in this book and I can’t talk about my feelings regarding Star by Star without talking about the Bad Thing. So….you have been warned!!

Star by Star initially felt like it was shaping up to be a standard New Jedi Order book, with the only main difference being its length. It clocks in at over 600 pages long which meant the author, Troy Denning, had much more time to build on the story and develop the characters. In particular, he finally healed the rift between Han and Leia in Part 1 of the book, and pretty much this entire section was dedicated to their healing time which was nice and very much needed!

Then, a daring plot was hatched, Anakin will lead a strike team into the heart of Yuuzhan Vong territory to try and take out the Voxyn Queen (having discovered that the lethal voxyn are all clones of this one ‘Queen’.) The strike team mostly consists of the younger Jedi Knights…with the exception of Ganner Rhysode.

Then, the Bad Thing happens. To say Anakin’s death blindsided me would be the understatement of the year. I had NO idea it was coming (which is surprising since I pretty much know all of the Legends spoilers there are) but somehow Anakin dying just slipped totally under my radar. I’m not sure if it was Anakin dying that caught me off guard or Leia’s reaction to his death as she felt the shockwaves of him passing in the force. Leia’s reaction was absolutely gut-wrenching to read and I am devastated for her. It reminded me so much of that scene in The Force Awakens when she feels Han passing – only exacerbated tenfold as she feels the passing of her youngest child.

Now I’m left trying to make sense of the situation. Why did he have to die? I felt like it was almost a waste – he didn’t go out in a blaze of glory, bringing down the Voxyn Queen or, better yet, Nom Anor (whose days I was convinced were numbered at this point). He got overwhelmed by a number of Vong, having previously injured himself rescuing Jaina. I think my lack of comprehension at his death comes from a deep-rooted unwillingness to acknowledge that he is truly gone. He’s had so many close calls over the years (as have Jacen and Jaina) that they have started to feel invincible to me. I’ve known Anakin since he was born. I’ve watched him grow up. Part of the joy of Legends is that you are granted a rare opportunity to spend multiple volumes of books getting to know and love these characters. I’ve probably read about 10 books with Anakin in, and he is as real and nuanced to me as Han, Leia and Luke themselves.

Not only that, but since the NJO – Anakin was my favourite. There was an innocence and purity to him that was never really apparent in the other characters. Unlike his older brother, Anakin’s path had always been clear to me and, though he might not have felt it at the time, I knew I could always count on Anakin to do the right thing. Not only that, but he was a formidable warrior and I thought he was shaping up to be the next Chosen One. I can’t believe I am having to talk about him in past tense. I can’t believe he’s not going to see out the war, or marry Tahiri. Since he died, I was reluctant to pick up the book and carry on because frankly I didn’t want to spend time in a galaxy where Anakin Solo is no longer there. When I did carry on reading, I found myself flicking back through the pages before it happened, just to see his name on the page.

Probably not since Sirius Black have I been so shaken up by a fictional character’s death. I think it goes to show the power of these Legends books and why they still have so much merit. Just because they aren’t ‘canon’ anymore doesn’t mean you shouldn’t read them. Because at their heart, they are good stories. The depth of my hurt at Anakin’s passing proves to me that these stories have a heart and soul that cannot be disregarded. They offer something which, as it stands, the new books can’t…time. You get to spend time with these incredible characters. You fall in love with them, get angry and frustrated with them, and root hard for them in their struggles.

To me, Star by Star was much more of a wake-up call than Vector Prime. Yes Chewie is iconic but to me, Anakin represented everything good and just about the Jedi Knights and about the New Republic and the universe is worse off without him. I miss him already. His absence was a massive hole in the final 100 pages of Star by Star that no-one else could fill. And I’m angry. I’m angry that Luke let them go on that suicide mission and I’m angry that Anakin was so reckless. I’m angry that he had to die and I’m angry that Jacen is coping so well. I found I needed things from Jaina’s point of view, her white hot rage at her brother’s death was a balm I needed to get me through to the end of the book.

I need some time away from the New Jedi Order, some time to reflect on this massive loss, and to come to terms with the fact that my heroes somehow have got to win this war without Anakin Solo. For now though, I almost pity the next Yuuzhan Vong who gets in Jaina Solo’s way!