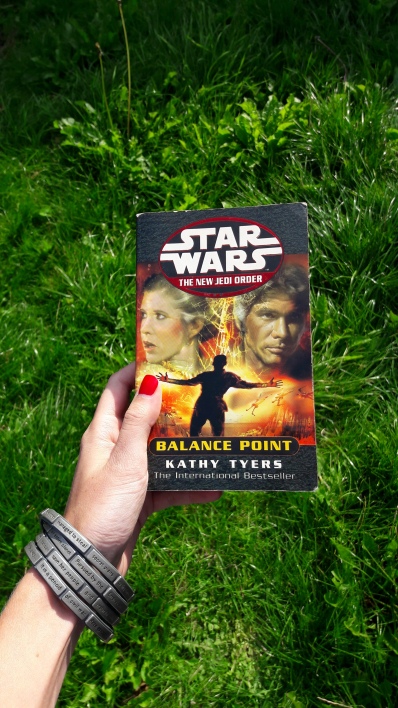 Jaina has been signed off Rogue Squadron for some much needed R&R after nearly getting fried in her last fight. She’s sent to Duro where Han and Jacen are helping out with the refugee crisis. Whilst this means we have a nice little family reunion, she still feels a little sidelined to me and we don’t get in her head as much as I would like.

However, Jacen is still as interesting as ever, even when he is also removed from the action. It is good to have the twins back together, and it was also lovely to have them spend some time with Han. We don’t get to see Han be a father very often and it was refreshing to see is interaction with the twins. Tyers did a great job of highlighting their common traits and familial bond which possibly runs deeper than their connection with the force. I think this book really showed that the force, whilst a powerful and vital role in Jacen and Jaina’s lives so far, doesn’t have to define them as people.

It did feel like Jacen was the star of the show in this book. He is still going on a massive journey and I am looking forward to following him on his path. The ending of Balance Point is breathtaking and I cannot WAIT to see what Tsavong Lah is going to do next! Speaking of Tsavong Lah, it would be remiss of me not to talk about the Yuuzhan Vong warmaster. Tsavong Lah is a terrifying villain and one of the scariest Vong we have seen to date. I’m glad we get to see things from his perspective as he offers us a unique look at the Vong from someone who is clearly very high up in their chain of command.

The Luke and Mara interactions in this book were lovely. As always I am a total mess when it comes to those two and so heavily invested in them it’s a little worrying! The Vong really are closing in and I have an almost palpable sense of worry for the well-being of my favourite characters. If I have one gripe with this series so far, I am struggling to comprehend that the New Republic, with the Rebel Alliance at its core, has so far pretty much rolled over for the Vong. I know there is crippling bureaucracy at play here but the Yuuzhan Vong are a more destructive force by far than anything the galaxy have ever seen, including the Empire. The Empire wanted to subjugate, the Yuuzhan Vong want to annihilate. I am a little disappointed in the New Republic (see, I’m not mad I’m just disappointed!) and its lack of any major defensive, except perhaps for the little debacle at Centerpoint but, then again, if we are relying on Thracken Sal-Solo for the thrilling heroics the galaxy truly is doomed!