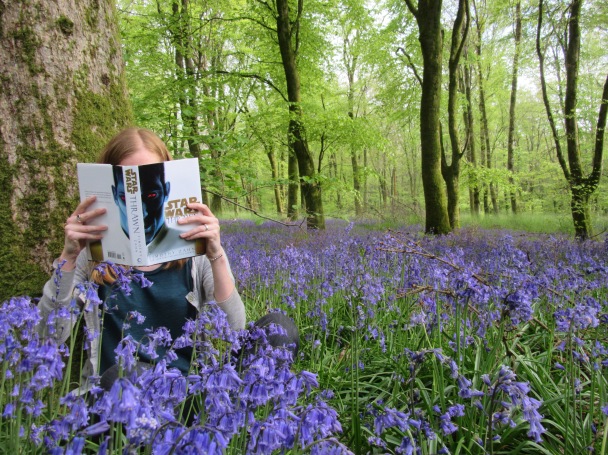 The first canon book written by the legendary Timothy Zahn, this novel takes place after the Clone Wars and the events of Revenge of the Sith, but before Thrawn’s appearance in Rebels. It’s essentially an origins story for our favourite red-eyed Grand Admiral, where Zahn weaves the tale of Thrawn’s indomitable rise to power through the ranks of the Empire.

As with Catalyst, Thrawn is essentially a character-driven book. We mostly see Thrawn through the eyes of his aide and translator, Ensign Eli Vanto. The novel follows Thrawn and Eli’s adventures as they rout pirate gangs, mop up various smuggling organisations and try to crack the mystery of Nightswan, all whilst trying to navigate the perils of the Imperial hierarchy.

In the meantime, we also follow the story of Arihnda Pryce as she moves from the backwater mining planet of Lothal to the bright lights and intrigue of the city-planet at the heart of the Empire – Coruscant.

Zahn has created a fascinating and intriguing new character – Eli Vanto. I was drawn to Eli almost immediately and liked him within a few pages. Zahn creates great sympathy for him, I wasn’t sure how I would relate to bunch of Imperials who we know are the enemy, yet by Eli being an underdog from the fringes of Wild Space, considered something of an outcast by his Imperial colleagues, you can’t help but root for him and, of course, for Thrawn himself.

At first, I wasn’t sure about having anything from Thrawn’s point of view, we have never had this in Legends, only ever seeing him through the eyes of surrounding characters and I wasn’t sure that I really wanted to get inside his head, lest the bubble of mystery that surrounds him be burst. However, Zahn does it in such a way that we’re not really getting inside Thrawn’s head. We still don’t really know what makes him tick. We just know that he analyses the situation around him, that he takes care to read people, their movements and body language to try and interpret what they are saying.

Throughout the novel, Thrawn seems to allude to a higher sense of purpose – a great threat lurking in the Unknown Regions which almost justifies a lot of his actions. The thing with Thrawn, and the reason he is such a compelling antagonist is that Zahn creates just enough empathy for him that you question whether or not he is really all that bad. You can understand his motives even if you don’t always agree with his means to get there.

However, Zahn also highlights that Thrawn is not completely infallible which I think is important in making him a character we can at least somewhat relate to. To make him otherwise would elevate him to god-like status which wouldn’t make him a particularly compelling character. However, in the novel, the eponymous Thrawn makes mistakes, he misreads certain people and situations and he is woefully out of his depth in the political machinations on Coruscant. Thrawn is a military genius, of that there is no doubt, but it was extremely interesting to watch him struggle to find his feet in the turbulent political climate of Coruscant and see him navigate and rise the ranks of the sometimes hostile and xenophobic Imperial Academy. On this point, I found we got some answers to questions we have been asking since the prequel trilogy, asked by Thrawn himself. Why is it the Empire is so anti-alien, given that aliens helped them during the Clone Wars and the Jedi uprising? These are questions raised by Thrawn himself as he encounters some hostility amongst his comrades

This novel also lets us have a look at a period in time which I find particularly interesting (it’s why I liked the Han Solo novels so much). This is the time when the Empire is almost at the height of its power and it’s stranglehold over the galaxy is almost complete. I loved the references to the Death Star being constructed and how Thrawn starts to uncover the project which is shrouded in so much secrecy.

Having not watched Rebels yet I was able to view Arihnda Pryce with a completed unbiased eye. For the most part I actually found her to be an extremely compelling and actually quite a relatable character, for a baddie! From the get-go we can tell she is an extremely motivated and ambitious person. I liked seeing Coruscant through her eyes, not as someone who takes the glitzy surroundings for granted, but as someone who aspired to be there. I think this novel has given me some crucial background into Pryce’s character and I can’t wait to meet her again in Rebels!

This novel certainly leaves you wanting more. The questions concerning the threat from the Unknown Regions which seem to dominate Thrawn’s actions have not been answered and everything he does seems to be for the purpose of this greater good. Does this forgive all his actions? You will have to decide!

Personally I found this book faultless (surprise, surpise – it’s a book all about Thrawn written by Timothy Zahn – of course I was going to adore it!). The only thing I would say as a note of caution, if you are a staunch member of the Rebel Alliance, you may find it difficult to relate to, or root for, any of the characters in this novel. If you have watched Rebels then you probably won’t root for Pryce like I did in this book because you know what an awful character she becomes (or so I have been told!). If you want to see good triumph in the face of evil then you will be disappointed in this novel. This is an Imperial book told from an Imperial point of view.

If however, you want a peek under the surface of one of Star Wars’ most interesting and mysterious villains then I think this will be for you!

Overall: a captivating character study of one of my all-time favourite Star Wars characters!