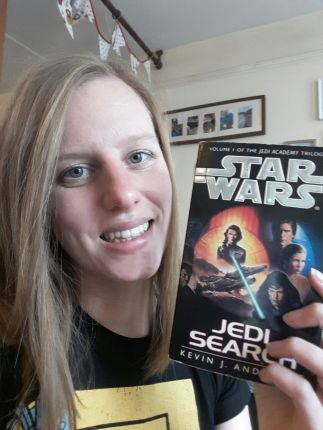 I went into this trilogy with a slight sense of trepidation – I had heard on the internet-verse that Kevin J Anderson (KJA) is quite a polarising author in the EU – either you can’t stand him or love him. Wellll…after reading this book I think I would have to say I fall into the latter camp! I found this book a lot, like seriously a lot, of fun. It’s not quite as well written as the Thrawn trilogy of course but I found I was completely gripped throughout and tore through it in less than twelve parsecs!

This book sees Luke taking the first steps towards setting up a new Jedi academy. This means not only finding a suitably safe and remote location, but also tracking down potential students scattered across the galaxy.

In the meantime, Han and Chewie are taken prisoner after crash landing on Kessel (remember the Kessel run guys?) and are forced to work down in the fathomless spice mines by the deplorable Moruth Doole who, unsurprisingly, has an old grudge against Han. Poor Han! Anyways, they manage to bust out of the mine with the help of a young prisoner called Kyp Durron, a force sensitive kid who has spent most of his short life toiling away down in the mines. As they are fleeing the spice mines, Han, Chewie and Kyp stumble across a secret Imperial research facility in amongst the black hole cluster
landing themselves straight from the frying pan and into the Cauldron Nebula. Geddit?

It has to be Han’s story in this book. Finally, an EU author who has given Han a decent storyline! Sometimes with Han you get the feeling that the authors don’t really know what to do with him so they just shoehorn him in to some plot which suits the overall story but falls a little flat in terms of Han’s character. Well this whole book to me felt like the Han and Kyp Durron story (more on Kyp later…) We get taken to the spice mines of Kessel (SO glad we got to go here, we now know why Threepio was so terrified of being sent there in A New Hope!) and encounter the creepy monsters that lurk in the dark tunnels under the mines, then whizz off to the isolated and seemingly inaccessible Cauldron Nebula – (a nice touch by KJA, I personally found it very believable that a small fleet of Star Destroyer could hide out in the middle of a nebula. KJA is an author who really gets the vastness of space and that places aren’t quite just a hop-skip-and a lightspeed-jump away!)

This book also introduces us to the character of Admiral Natasi Daala who was heaps of fun and an interesting addition to the cast of Imperial Admirals. Again I think she is a little Marmite but I personally found her to be a flawed and well-rounded character who was extremely interesting to read about. Granted she’s not the most competent Imperial officer we’ve ever come across but she’s fiery, aggressive and yet surprisingly charismatic. She is utterly devoted to the Empire and the order that it provided the galaxy.  KJA wrote her story so well and I actually could convince myself that she was just lurking off screen in A New Hope, before being booted off to oversee The Maw Installation.

For me I personally found Luke a little unrelatable in this book. Although I like the fact that he is starting his search for potential students of his new Jedi Academy, he was a little bit too Ohhmmmm Serious Jedi Master for my taste. It just made him a little distant and emotionless, where I always liked Luke for his slightly whimsical farmboy attitude.

I also thought Winter suffered a lot in this book. Well the whole trilogy really. Having been reduced to Leia’s ‘personal servant’ (urgh) she is essentially been relegated to nanny for the Solo children (who by the way are completely vile at the moment, although I hope this is just because they are still at a very young, annoying age at the moment). This isn’t the destiny I pictured for Winter at all and I hope KJA sorts this out later in the trilogy.

Finally, Leia doesn’t really do much in this book. Although KJA is clearly trying to show the strain being placed on her in terms of her political duties, her Jedi training and the not insignificant burden of trying to raise twins (thank goodness for nannybots really! They need to hurry up and invent IRL these methinks). I get what KJA was doing with Leia but I personally would have liked to have seen a bit more action on her part.

Overall: a seriously fun read and although the characterisation of Luke falls a little flat, the storyline of the book is a blast and is well worth reading even just for Han and Kyp’s adventures alone.

Rating: 4 out of 5 Death Stars for Jedi Search!