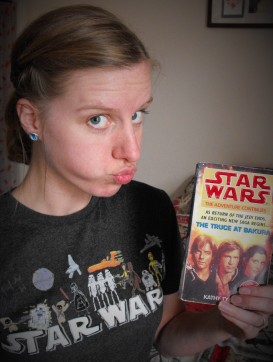 Truce at Bakura picks up about 45 minutes after the events of Return of the Jedi – so you can’t get much more of a sequel then this!!
One of the more frequently asked questions online when it comes to the Star Wars books is ‘where do I start?’. A lot of the time, people recommend the Thrawn trilogy by Timothy Zahn as a good starting point for newcomers to the Expanded Universe (especially those interested in post Return of the Jedi events) but I disagree. I think Truce at Bakura is a great place to start – you’re not committing yourself to a trilogy so you can just dip your toes in and decide whether Star Wars literature is for you or not plus it’s a really great, exciting and self-contained story.
Without any further ado – as I said above, the story picks up almost immediately after Return of the Jedi in the far flung reaches of the galaxy on the former Imperial outpost of Bakura. Bakura is under attack by the Ssi-Ruuk, a reptilian species who are planning to enslave human minds to pilot their war machines. (Yikes!) Leia hopes to gain an ally to the budding New Republic in the form of Bakura whilst Luke receives a vision from Obi-Wan Kenobi’s force ghost that he must also head to the besieged planet or risk losing everything the Rebellion fought for. In the meantime, an unlikely alliance must be forged between the New Republic and the remaining Imperial fleet against the overwhelming force of the Ssi-Ruuk.
The good
This book is all about  fact that actions have consequences – whether it’s Luke still feeling the effects of his battle with the Emperor (a nice touch by Kathy Tyers), or Leia trying to come to terms with the fact that Darth Vader is her father. This was great to read as you only really see Luke process this information in Return of the Jedi but Leia misses all of this and, crucially, wasn’t there to see Vader’s heroic saving of Luke and his ultimate redemption. To Leia, he is still this sinister figure in a mask who hounded  the Rebellion for years and committed countless atrocities across the galaxy. Leia has great character development in this book which was much needed in the fallout of Return of the Jedi.
Tyers also handled sheer the vastness of space excellently – I really enjoyed the fact that after Return of the Jedi of course not all of the Empire had heard the news that the Emperor was dead! It was a nice touch and Kathy Tyers dealt with the tentative Truce between the Imperial fleet and the burgeoning New Republic very well.

The Ssi-Ruuk are an interesting new alien species and their entechment of their poor human victims was horrifying and added a good deal of urgency to the book. I was on the edge of my seat willing Luke to hurry up and beat the crap out of them! Plus the Ssi-Ruuk themselves – they are dinosaurs with guns people – DINOSAURS WITH GUNS!! 😀 Haha, Jurassic Park would have been much more fun if the Ssi-Ruuk were running around the island! It was also refreshing, coming from a post Return of the Jedi perspective to see our heroes go a few rounds with an enemy that wasn’t the Empire.
The bad
Whilst Kathy Tyers really got Luke and Leia’s portrayals spot on in this book, I think Han fell a little flat. I felt like Tyers just didn’t know what to do with him – and this is a worry for me about his place in the future EU books. I mean, he’s not a Jedi so he can’t follow Luke on his adventures, and he’s certainly no politician so can’t help Leia out as she basically tries to run the galaxy. Up next is The Courtship of Princess Leia and it looks like this is the book is going to have a lot of Han/Leia action in it, so maybe this will put to rest some of my questions as to how Han is going to fit in moving forward?
Overall – a cracking story with some important character development for Luke and Leia which is not to be missed.
Rating: 4 out of 5 Death Stars for Truce!